In a first-time collaboration with Chicago-based artists Isaac Couch and Sarah Whyte, Lefthand explores impactful alternatives to institutional violence and navigates sustainable forms of social and political change. Led by Lefthand, who works at the intersection of art and social practice, the three artists consider the relationship between personhood and institutional violence, utilizing elements of performance and design to conceive wearable art that re-imagines the human form as transitory, lucid, ethereal, and disruptive. 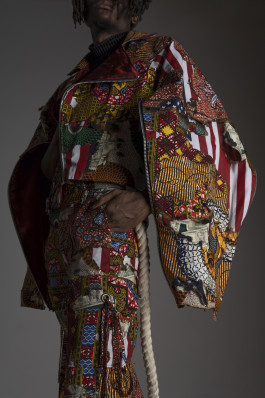 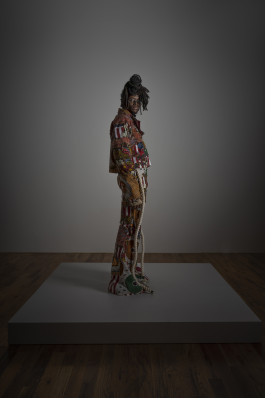 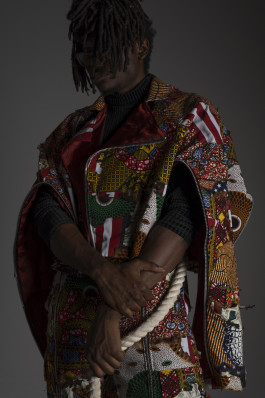 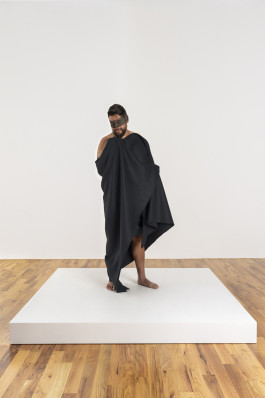 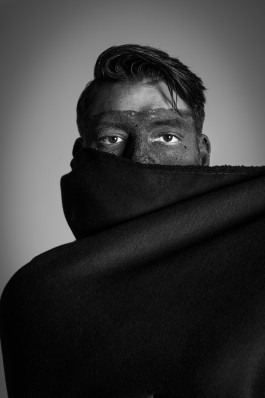 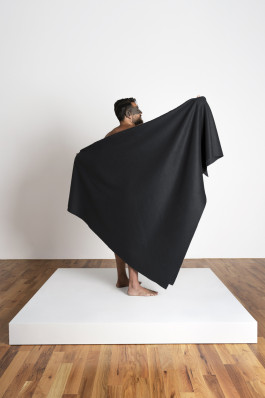 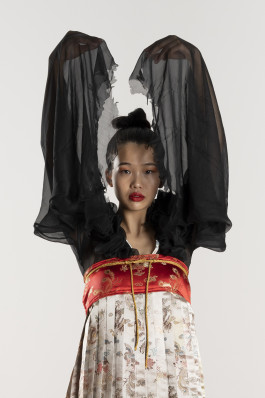 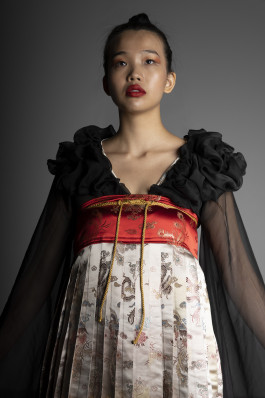 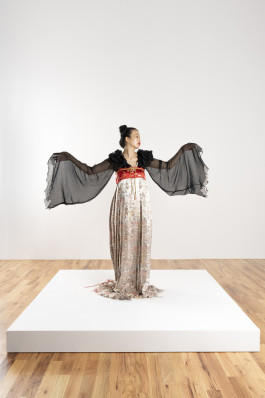 Placing a strong emphasis on cultivating a progressive and intuitive working process through the use of embodied practice and mindful self-awareness, the three artists are constructing garments that they will activate through a series of performances that extend beyond the workshop dates. Although the garments are created collaboratively from ideation, construction through to activation, each artist brings their own narrative and practice to the process. Isaac Couch, a fashion and fiber artist who works with garment silhouettes and heavy materials, focuses on the role of social issues and climate change within the fashion industry. Sarah Whyte, a Chinese American fiber artist and painter, addresses questions of identity through embroidery and paintings. Combined with Lefthand’s integration of movement and performance into the collaboration, the workshop draws from personal practices and historical narratives of socio-political violence to imagine new and innovative approaches to nonviolent intervention.

The work produced during the workshop will be exhibited in our storefront windows August 16–28.

On the path between violence and love, we search for something familiar and unknown
August 16–28, 2021
● Window installation on view

Experimental Makers Workshop: Community Event encourages visitors to interact with the garments constructed in the workshop by artists Isaac Couch, Joseph Lefthand, and Sarah Whyte. The artists’ previous work will be on view as well to illustrate how their individual practices informed the pieces made in collaboration during the workshop.

Each hour, Joseph Lefthand will be giving intimate performative narratives with his garment, exploring the role of Indigenous land acknowledgments, historical violence, grief, and resilience as building tools for new societies.

The event will also feature an art-making activity for all ages. Led by the Weinberg/Newton education team, this hands-on activity welcomes visitors to screen-print their own t-shirt with an exclusive design created by Couch, Lefthand, and Whyte. The gallery will provide all supplies, including fabric markers to encourage participants to personalize the design and make it their own. 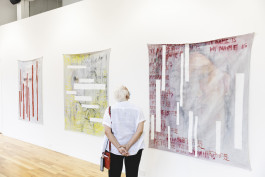 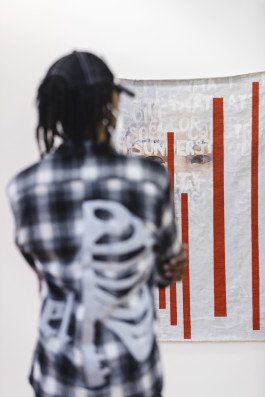 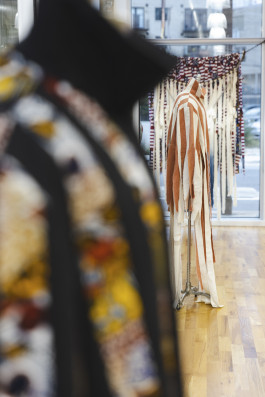 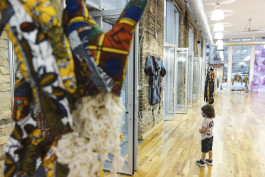 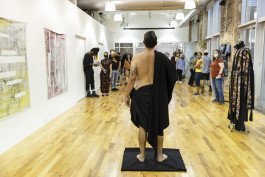 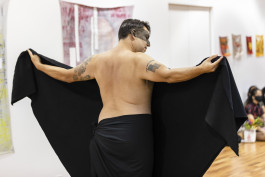 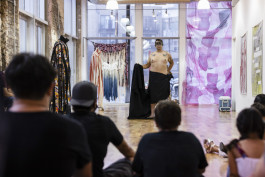 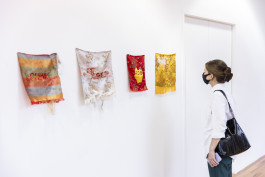 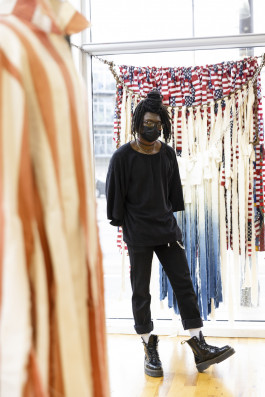 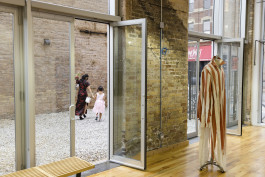 Joseph Lefthand is an artist, administrator, and cultural advocate based out of Chicago. Descended from the Cheyenne-Arapaho, Taos, and Zuni tribes, Lefthand works at the intersection of art and social practice, exploring the role of embodied movement, "performance-as-theory", and communal inquiry as sustainable modes of discourse in confronting institutional and state violence.

His most recent work includes producing a series of performances, artist talks, and community dinners exploring the role of US foreign policy and military intervention in shaping the immigratory experiences of Latin and Asian artists, in partnership with the Justice Hotel at 6018|North art center. Past work includes acting as performance advisor, rehearsal director, and reenactment trainer for Dread Scott's 2019 "Slave Rebellion Reenactment" in partnership with London-based filmmaker John Akomfrah; performance advisor and instructor for Chicago-based artist Jefferson Pinder's 2019 productions "This is Not a Drill" and "Red Summer Road Trip", a series of site-based performances exploring the collective memory of militancy, classism, and race in the Black American experience; and co-creator/co-performer of "Procession: Return to the Body", a multi-modal landscape created at the Chicago Cultural Center in conjunction with the 2019 National Veterans Art Museum Triennial & Veteran Art Summit.

At once a healer, advocate, investigator, and scholar, Lefthand's work is in continual dialogue with the cultural and historical implications of war, militarism, violence, and resistance.

Originally from Western KY where corn is farmed and coal is mined, Isaac Couch has brought his southern perspective to the northern city of Chicago where he lives and works. After receiving a Bachelor's degree in Merchandising Apparel and Textiles from the University of Kentucky, he went on to earn his Masters of Design at SAIC. During his time there he learned how to express his passion for issues such as the social relations within his country and climate change as it relates to the fashion industry. Following graduation he was awarded with both the Luminarts Fashion as well as the Fashion Council Graduate Fellowships.

Sarah Whyte is a Chinese American fiber artist and painter whose work questions her identity. According to paperwork she was abandoned two days after being born and was brought to the Social Welfare House of Pingxiang city, China. She was then adopted from Jiangxi province, and brought to the United States where she grew up in Virginia and then later moved to Texas. Her work is an exploration of self, trying to make sense of what she knows and doesn’t know about her family, ancestry, history and identity. She recently received a Bachelor’s of Fine Arts at the School of the Art Institute of Chicago and has been the studio assistant for artists Anne Wilson and Aram Han Sifuentes. As an emerging artist Sarah’s work has been exhibited in various venues in Chicago.